The Real Route of Dakar Rally 2023 with An Official Announcement!

The Amaury Sports Organization (ASO) has officially declared the dates and routes of the 45th Dakar Rally. Dakar Rally 2023 Route From Dec. 31, 2022 To Jan. 15, 2023, this world’s wondering race event will take place in Saudi Arabia. The race director, David Castera presented the race map, schedule, and routes of the upcoming event on May 12, 2022.

And the organizers have published a couple of stage and format details of the toughest race competition too. This time HA’IL is going to be the host city on 2nd January where Jeddah would be the final destination on 15th January 2023.

Like the recent past two events, the route of the next edition will comprise only the Saudi territory. Due to the COVID-19 pandemic, there is still no plan to annex the neighboring countries with the next rally route. In this article, we will know the real route distance, racing stages, and formats of the Dakar rally 2023. Let’s discover the details!

The iconic Dakar rally 2023will touch three major cities of Saudi Arabia. These are the welcoming city Sea Camp, the resting city Riyadh, and the ending city Jeddah. Before having details about the route map, let’s find few words about these cities of the country.

This is one of the ancient cities of Saudi Arabia known as the capital of Arab nomads. It is a popular city to the traders that links between the Red Sea and Mesopotamia. You will be grateful for the generous behavior and hospitality of the city dwellers. A city of welcoming feeling is going to be ready to host the next Dakar race.

Riyadh, the capital city of Saudi Arabia is a hub of prosperity, culture, and generosity. It is a safe home of more than six million inhabitants. You will find here eye-catching skyscrapers and innovative architectures like the Burj Rafal and the Kingdom Center. The demographic and economic growth of the city will amaze you on the resting day of Dakar 2023.

DAMMAM, the second largest city of Saudi Arabia after the capital Riyadh. This is the main gateway to Macca lies beside the Red Sea. It is the commercial center of Saudi Arabia with the world’s economic attraction. And the city is one of the tourist destinations of the country. Both the domestic and foreign visitors love outings across this modern and developed city. Fortunately, DAMMAM would be the ending destination for the Dakar 2023 competitors. 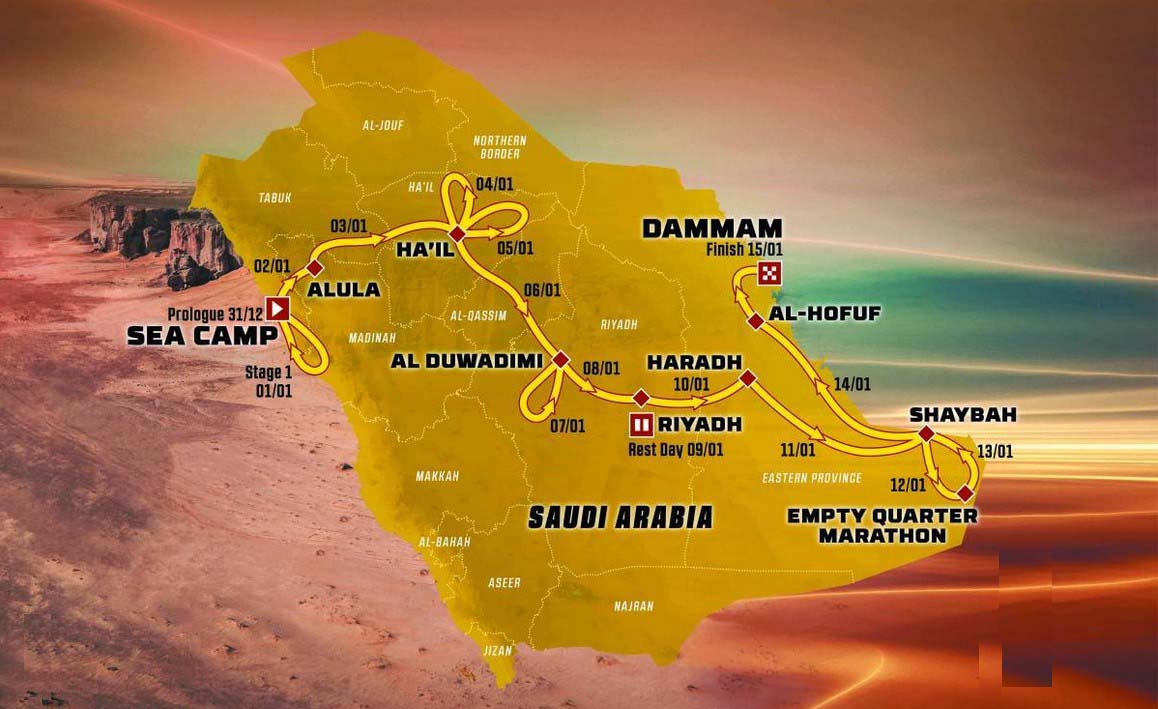 Routes to Reveal for the Dakar Rally 2023

The organizers have already revealed the route of Dakar rally 2023 that comprises 4000km of special stages and 3000km of liaisons approximately. It includes 12 stages to overcome including one prologue stage, two-loop stages, and one marathon stage. We will discuss here the routes and stages of the raid rally race accordingly.

The Route will Start from Sea Camp

The 2023 Dakar rally racers will hit the route from Sea Camp on the Dec. 31, 2022. They will start their first stage on a substantial stretch of sand. It would be a good lesson for the drivers to adjust to a lot of sand in the next stages.

From Sea Camp to Riyadh, the drivers and crews will pass six stages of sand, rocks, and dunes. There will be one prologue stage and two-loop stages also.
On the route from Sea Camp to Dammam, the competitors will have to go through canyons and cliffs passing by the Red Sea coastline. And the stretches of dunes surrounding the route to Riyadh will suffer the drivers a lot.

Before airlifting for resting in Riyadh, the racers will race on the dunes of the Rub al-Kali desert for three days. According to Dakar race director David Castera, the stages on Empty Quarter will be back at the upcoming event.

The world Dakar rally lovers missed the particular passing into Empty Quarter in the last event due to an unavoidable death of a motorbike driver in 2021.
According to the route reveal report, the Empty Quarter of the Rub-al-Kali desert will be highly challenging due to sandy dunes. And there will be three exclusive sand stages and a marathon stage to perform on the Empty Quarter.

The Route will End in Dammam

Prince Khalid bin Sultan Al Abdullah Al Faisal, the chairman of the Saudi Automobile and Motorcycle Federation stated that the route of the 45th edition from Sea Cam to Dammam would be a magnificent landscape. It will present the real essence of our nation to the participants, visitors, and spectators.

Mr. Faisal added that we are blessed with such a route to arrange the world’s sensational race rally show for the third time. And we have a tie to the organizers for another two years to host successive two events of 45th and 46th editions too.

David Castera pointed out that the route would be 80% uncommon to the drivers and crews. And there will be a lot of tracks and two loops to assist the crews in settling on dunes. After a year off, three thrilling stages will be back on 100% dunes including a marathon one he added.

On 7th January of the year, the drivers and crews will anchor their caravans in Riyadh for having a rest for a day. And on this day, they will get the scope to identify their weaknesses and strengths to draw their racing plan for the rest of the route heading Jeddah. See More.

The Amaury Sports Organization (ASO) thinks that this route would be a nice one to test the endurance of the crews for off-road navigation. The sandy Arabian desert will throw challenges to the racers to complete the race on a different landscape.

On 8th January, the crews will hit the route again passing by the Red Sea coastline. And they will drive into the deep dune and Empty Quarter to complete the rest of the stages. And the high-speed stretches will be heading to Jeddah.

Finally, on the 15th of January, the route of around 7000 km will come to end up in Jeddah. And the city will welcome the champions of distinguished categories of the Dakar rally 2023.

The organizers have pointed out all the possible safety measures to make the route safe for the crews. None wants to see the repetition of death and fatal injuries of drivers and crews into the deadly Empty Quarter or dunes. An iconic Dakar rally on the royal route from Sea Cam to Dammam is going to be held in 2023. Never miss enjoying!